A rock on Mars, discovered by NASA’s Curiosity rover,  is surprisingly similar to a well-known kind of rock on Earth. 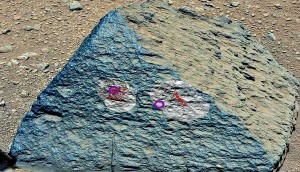 This type of rock is the first of its kind encountered on Mars.  The 16-inch-tall pyramid-shape rock is named “Jake Matijevic” in honor of a Curiosity mission team member who died in August.  Curiosity encountered “Jake” at its landing spot in Mars’ Gale Crater.

Curiosity was launched November 26, 2011, at 10:02 EST and landed on Mars at Gale Crater close to midnight on August 5, 2012.   Curiosity used a much more precise landing system than previously attempted.  Thanks to the people at NASA and JPF, Curiosity is now going about it’s business assessing the habitability of the Red Planet.

A primary mission objective is to determine whether Mars is or has ever been able to support life.  Curiosity can chemically analyze samples by scooping up soil, drilling rocks, and using a laser sensor system.

Other goals of this mission are to collect data for a human mission, study Martian geology and study the climate. The discoveries on Mars may help us address climate change issues on Earth.

The Curiosity rover is about five times larger than the Spirit or Opportuity Mars Exploration Rovers and carries more than ten times the mass of scientific instruments. Curiosity will explore for at least 687 Earth days (1 Martian year) over a range of 5–20 km (3–12 miles).

The Mars Science Laboratory mission is part of NASA’s Mars Exploration Program, a long-term effort of robotic exploration of Mars.  The project is managed by the Jet Propulsion Laboratory of the California Institute of Technology  for NASA.  The total cost of the MSL project is about US $2.5 billion. 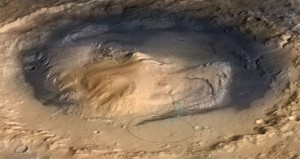 Entry, descent, and landing for the Mars Science Laboratory missionwill use a guided entry and a sky crane touchdown system to land the hyper-capable, massive rover.Image credit: NASA/JPL-Caltech