In a symbolic and historic  “handshake”, the astronauts inside the International Space Station reached out with their robotic arm and grabbed the Dragon by the tail.  On Friday the first private spacecraft docked with the remote outpost orbiting 200 miles above our heads.

It was more than just supplies the Dragon delivered, but the promise of a carrying crewmembers.  Since the retirement of the Space Shuttle, the only other way to orbit is aboard a Russian Soyuz spacecraft

This adventurous and historical feat may create a powerful alliance that re-enables NASA to put more focus on the science of space travel and sending humans to Mars.  In addition, the prospects for free enterprise in space are boundless.

Congratulations to Elon Musk and everyone at SpaceX, NASA and the astronauts aboard ISS.   This is a great day for people on Earth and another step into a new frontier  for all humanity.  The civilization we ultimately create in space and the worlds we will visit may well be beyond our wildest imagination. 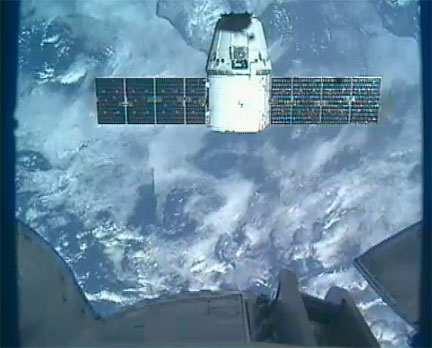 SpaceX's Dragon spacecraft about 30 meters from the station. Photo: NASA

SpaceX Dragon docks with the International Space Station — the first private spacecraft ever to do so. (Credit: NASA)